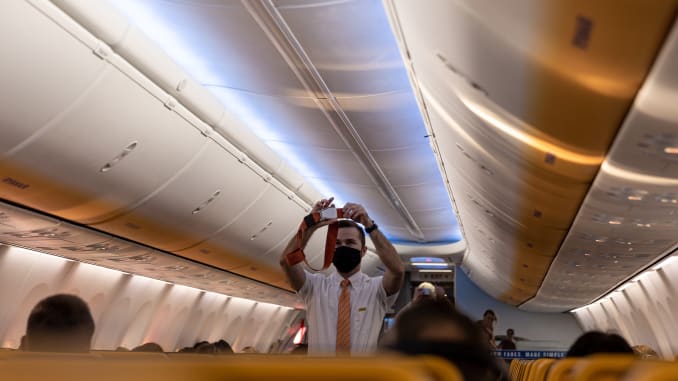 Shares of the European travel sector sank Monday morning as investors grew anxious over a rise in coronavirus cases in the region.

The sixteen top travel and leisure stocks in Europe fell more than 3% in the first hour of trading, with Tui, easyJet and International Airlines Group — the owner of Iberia and British Airways — all down by around 10%.

Investors are worried about a recent jump in infections in certain European regions and the subsequent implications for travel. Spain, for instance, has seen a spike in new cases since July 15. According to Reuters, which cited health ministry data, new infections have come in above 900 in recent days, a level not seen since the country reopened its economy in late May.

The U.K. government surprised many tourists over the weekend with the decision to remove Spain from the list of countries exempted from quarantine upon arrival in England. This came after the regions of Catalonia, Aragon, Madrid and Pais Vasco saw a spike in the number of Covid-19 cases. The Spanish government has said the regional outbreaks are under control and the country is safe for Spaniards and visiting tourists.

Tui decided to cancel all holidays in mainland Spain until August 9. Ryanair has said it will not reduce its flights to Spain and said the U.K. government’s decision was “regrettable.”

France has also advised its citizens to avoid traveling to the most affected regions of Spain.

Luxembourg, Romania, Bulgaria, Sweden and Spain have registered the highest number of cumulative infections (per 100,000 people) over the last 14 days across the region, according to the European Centre for Disease Prevention and Control.

This has led, for instance, the Greek government to request a negative test result for those traveling to the country from Bulgaria and Romania.

“I don’t think this is of immediate major economic consequence (relative to what we already have) but if this is happening at the height of summer it begs the question of where we’ll be in say November,” Deutsche Bank analysts said in a note Monday regarding the recent cases in Europe.

Some analysts were expecting the summer months in Europe to be much quieter in terms of new cases, associating the winter period, when people tend to get colds and flus, as the most likely period for a second wave in the region. Disease specialists have argued that a recent rise in cases may actually just be a continuation of the first wave, and some suggest the number of infections would have to reach low single digits in a country for the first wave to be classed as over.

“We think the sudden change in (the U.K.) government policy could negatively impact customer booking confidence,” analysts at Jefferies said in a note Monday, suggesting that tourists might opt for stay-cations or simply not take a vacation at all this summer.

Though this might boost domestic tourism industries, it poses challenges for airlines and the wider sector in Europe. Ryanair said Monday morning that it expects a “very challenging year” on the back of coronavirus’ related uncertainty.

“It is impossible to predict how long the Covid-19 pandemic will persist, and a second wave of Covid-19 cases across Europe in late autumn (when the annual flu season commences) is our biggest fear right now,” the Irish carrier said.

Speaking to CNBC Monday, Mark Manduca, managing director at Citi Research, said these sudden restrictions would be the “new normal” for short-haul flights in Europe, which until recently seemed the only viable option for investors into the sector amid border closures.

He explained that the recent change to quarantine policy in the U.K. has meant that “at any time summer can be taken away” and this will create a “domino effect across the European (airline) market.

Other parts of the world, including India and Hong Kong, have also been reporting higher numbers of infections. At the same time, the situation in the United States and Latin America is far from being under control.

The Online Publishers Platform is the best place to find one of a kind photos online if you are looking for a place to find options for a large stock of photos to use. TOP platform has connected with amazing photographers and they can offer a top of the line selection whenever you need some photographs for one reason or another.