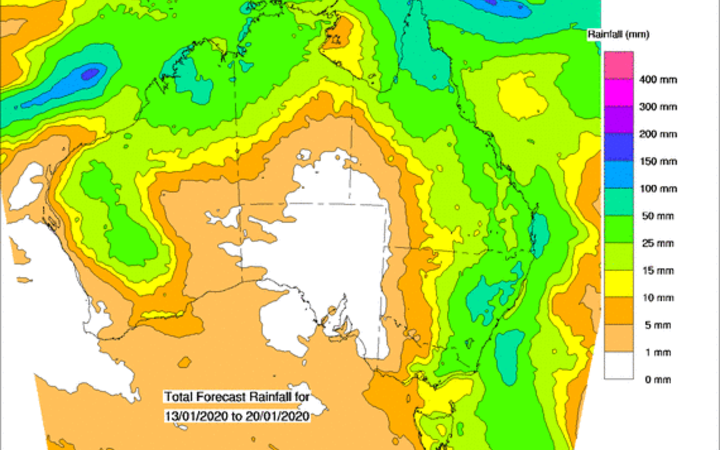 Finally, there’s a forecast for Australians to get excited about. Widespread rainfall is expected for the east coast of Australia, including the firegrounds, starting tomorrow and lasting into the weekend.

The total forecast rainfall for Australia from Monday to 20 January. Photo: Australian Bureau of Meterology

Over the four-day period between Thursday and Sunday, the Bureau of Meteorology (BOM) said it was possible for accumulated rainfall totals of 30-80mm across the east of Australia.

The heavy falls are most likely about the ranges, with isolated daily totals in excess of 50mm underneath any storms that form.

Rainfall would be welcome, but it may yet be a double-edged sword.

The tropical north has been getting a deluge over the last few days as the monsoon trough has finally made its way down to Australia.

Sarah Scully, extreme weather forecaster at the Bureau of Meteorology (BOM), said the monsoon had brought an increase in humidity and available moisture to mainland Australia.

“As well as that, over eastern Australia we’ve had a high-pressure system that’s been sitting in the Tasman Sea,” she said.

“That’s been directing a moist onshore flow over the eastern part of Australia over the last few days.”

All of this moisture is forecast to collide with a deepening low-pressure trough.

The trough is expected to develop over central to western New South Wales, extending right down into Victoria over the coming days, according to Scully.

What’s exciting is that the trough is forecast to be really slow moving, bringing plenty of opportunities for showers and storms as it slowly makes its way across to the east coast.

“So with the instability that’s created by this trough, plus the increased humidity, all those ingredients go together to create a really unstable environment with increased showers and thunderstorms,” Scully said.

Even the Rural Fire Service is getting hopeful about the predicted rainfalls.

Scully said there was potential for fires that were beneath a thunderstorm to be contained by that rainfall.

“The best-case scenario, with the ongoing showers and storms from Wednesday onwards, is that they can really impact and help to extinguish some of the fires,” she said.

But keep those fingers crossed, because the hit-and-miss nature of thunderstorms means that the rainfall can vary a lot.

“It’s very likely that there’s going to be an increase in shower and thunderstorm activities,” Scully said.

“What’s difficult to say is the exact location where the heaviest totals are going to be accumulated.”

As well as possibly dampening the fires, this rain could reduce the chance of new ones forming.

Over the last few months a series of dry frontal systems have swept across parched southern Australia, generating dry lightning and new fires.

“At least with this heavy rainfall the ground will be more moist and it’ll be harder to ignite,” Scully said.

She said lightning associated with the storms over the next few days would be accompanied by rain, so less of a risk of starting fires.

But there are definitely hazards associated with this next batch of weather.

“There’s a risk of flash flooding and landslips with any heavy bursts of rainfall, particularly over the dry and burnt out areas of NSW and eastern Victoria,” Scully said.

“They are particularly vulnerable because the recent fires have cleared the groundcover, which allows or accelerates the runoff and also reduces the absorption by vegetation.”

The runoff can also contain contaminants and be a risk for tanks and waterways.

Just a small amount of rainfall can also be a hazard to firefighters because it can make conditions slippery, making operating heavy machinery in the bush difficult and reducing the effectiveness of backburning.

According to Scully, strong winds associated with the thunderstorms also increases the risk that trees, recently weakened by fire, could fall.

South Australia and southern Western Australia look like they will be missing out on this round of rainfall.

But once the trough has gone through there could potentially be even more good news in its wake.

The trough bringing rain to the east is expected to move off the coast by Monday or Tuesday, but the next system to move across the country could also bring rain, thanks to Tropical Cyclone Claudia, currently spinning off the West Australian coast.

“It’s still a number of days away, but it does look like some of the moisture from Tropical Cyclone Claudia may be picked up by the passage of a frontal system,” Scully said.

Perhaps it is worth crossing your toes, too.

Before you get your hopes up, it is not nearly enough rain to be drought breaking.

“Look, Australia’s been in a really long drought and it’s going to take many above-average rainfall events for it to really have any impact on the drought conditions,” Scully said.

This week’s rain is very welcome but with no strong indication of wetter-than-average conditions on the long-term outlook we aren’t out of the woods yet.

“Your impact is measured not by what you do, but by what happens to other people when you do it.” – John Jantsch. Visit The Online Publishers TOP online publishers.

“TOP platform” The Online Publishers is the best place to check first for freelancer jobs and ebooks to read.