Latest Articles
Home News What are the most powerful passports of 2020? 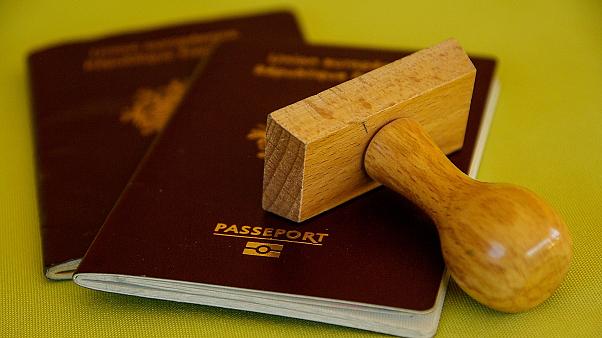 What are the most powerful passports of 2020?

The latest passport power rankings have come out and Asian countries have emerged as the winners. European passports, on the other hand, have shuffled down in the ranking.

Japan and Singapore have firmly established their lead on the passport power ranking, overtaking countries such as Germany and Finland.

The Henley Passport Index measures which passports are the most powerful out there based on the countries its holders can enter without prior visa approval.

For the third consecutive year, Japan hung on to its lead. Japanese citizens can enter 191 countries either without a visa or a visa on arrival. Singapore dropped down to second place with a score of 190.

Meanwhile, South Korea and Germany lost one rank, moving down to third place. Passport holders from those countries don’t need to bother with visas in 189 destinations.

Which factors determine the power of a passport?

The Henley Passport index collects data on how many sovereign states and destinations within those states an individual can go and visit without applying for a visa beforehand.

With the rise of Asian passports, are other passports worth less now?

One of the main outcomes of the 2020 passport power ranking is the growth in power of Asian passports, particularly Japan, Singapore and South Korea.

Paddy Blewer, Group PR Director at Henley & Partners told Euronews that “passports and regional travel are a representation of positive or negative diplomatic trade and economic relationships and the status of a sovereign state. Therefore the index demonstrates a rising relative influence of Japanese, Singaporean and South Korean importance to global trade, global politics, global economics.”

According to Blewer the Japan, Singapore and South Korea have truly caught up with nations, such as Germany and Finland. However, “if you look at the numbers, over the last 10 years, for instance, some of the G7 members, Germany, US, the UK haven’t actually changed the number of destinations with visa-free travel significantly.”

The UAE has made the biggest journey up in the rankings in the last 10 year because of its economic growth, its growing global importance in the sense of trade and geopolitics. Therefore other countries, are keen to offer its citizens’ visa-free travel. That would be even more so true of the top Asian nations, such as Japan, Singapore and South Korea.

US and UK continue downward trajectories

While both the US and UK remain in the top ten, their shared eighth place is a significant decline from the number one spot they held in 2015.

US and UK nationals can travel to 184 countries without the headache of having to apply for visas beforehand.

Following the Conservative government’s landslide victory in the UK late last year, the future of mobility and travel freedom between Britain and the EU remains uncertain.

Blewer says that it is still “unknown whether the British passport will fall post-Brexit with regards to value.”

“However,” he adds that “there are signs that British citizens are concerned about visa-free travel about passport power because there’s been a massive increase in applications for Irish citizenship over the last year, the vast majority of whom are British citizens.”

According to Blewer, we may be beginning to see the results of the longterm effects of Brexit.

Prof. Simone Bertoli, Professor of Economics at Université Clermont Auvergne (CERDI) in France, says that while countries around the world insist that they are taking steps to attract “the best and the brightest”, a rather different picture is currently emerging: “When it comes to talent migration, a worrying gap between policy and rhetoric has been opening up over the past year. The sluggish improvement of labour market conditions after the 2008 crisis, and the concomitant rise of nativist political parties, is reinforcing the perception of immigration as a threat rather than as an opportunity.”

What about the lowest ranking passports?

On the other end of the spectrum, not much has changed with the lowest ranking passports.

Afghan nationals can only travel to 26 countries without having to bother with visas beforehand.

“It is quite hard to lose visa-free travel but once it is lost, it is much harder to regain it,” Blewer says. He adds that sovereign states would want “a prolonged period of peace, reconstruction, reconciliation and reintegration with the global international system before there would be concerns about the potential consequences of offering visa-free travel.”

Most of the countries, which have been at the bottom of the ranking have been in unstable political situations over the years. Blewer says, “I think it’s fair to say that there’s been a fairly solid group at the bottom who have rather unfortunate situations in terms of in or around their area. […] Those countries are consistently close or at the bottom, depending on geopolitical specifics. In general, countries that are at the end of the index have deep challenges as regards to sovereignty, geopolitical issues and democratic deficits, rule of law, that sort of issue.”

Over the past ten years, the UAE passport power has climbed 47 places over the past decade. Even though it hasn’t made it to the top ten yet, it is now sitting in 18th place with a score of 171.

“It has been an ongoing trend,” Blewer says. The UAE has been “genuinely successful, largely based around the internationalisation of the UAE and a number of its core emirates as global business centres and global business powerhouses. We see no reason for this to change.”

Who is expected to rise up in the rankings over the next few years?

“The consideration for what passport will become much stronger in the future depends on a fundamental change in status of that country,” Blewer points out.

Montenegro is one of the countries which is expected to rise up in the years to come, since it has just recently announced the start of a citizenship-by-investment programme, whereby global investors can acquire Montenegro citizenship through large investments.

The reasons why this is particularly attractive in terms of passport value is that the country is part of the Schengen travel area. That means that even though it is not part of the Schengen treaty, holders of a Schengen visa can enter the country without having to apply for a Montenegro visa. Secondly, it is a candidate member of the European Union and it is expected to meet all the requirements in the near future.

“Once that happens, Montenegro’s economy will grow, it’ll become more stable, it’ll make commitments to rule of law,” Blewer says. “ You put all of those things together, the passport will rise.”

Blewer also expects countries, such as North Macedonia, Bosnia Herzegovina or Albania to rise in the ranking in the years to come, since “those sovereign states have made the necessary domestic and international policy moves to better integrate with the global international system.”

Can you buy a more powerful passport?

More than half of the world’s nations now have citizenship-through-investment programmes.

In Europe, Malta and Cyprus have official citizenship-by-investment programmes, according to Blewer. Austria doesn’t have a programme, but the Austrian constitution stipulates that one can acquire Austrian citizenship through certain schemes of investments.

Cyprus, for example, offers citizenship for a minimum of around €2 million real estate investment.

In 2014, the global rich spent an estimated amount of $2 billion on acquiring new nationalities.

The interest in attaining citizenship through any of these types of programmes is “generally global,” Blewer says. “Although it tends to be from sovereign states where there is limited passport power.”

However, he adds that sometimes “you do get the occasional Brit, American or German that wants alternative citizenship.” Blewer explains that the reason for that could sometimes be work in countries, where kidnappings happen relatively often. Kidnapping risks can be lowered if you enter the country on a different passport than the very powerful one you already have. Although those types of citizenships are not necessarily attained through investment programmes.

It is very difficult to generalise, which nationals are particularly active in the citizenship-through-investment programmes, “other than, once there is a growth in wealth of a region, so for instance in East Africa, South Africa and West Africa. There is a genuine rise in private wealth, legitimately made, highly verifiable. But the global economic and diplomatic system hasn’t caught up yet to permit visa-free travel.” So, some of these people who have acquired that personal wealth may want to be able to travel to Europe without a visa and therefore engage in a citizenship-through-investment programme.

However, Blewer stresses that “this isn’t about an emigration story.” It doesn’t mean that those who acquire new citizenship necessarily leave home. But it is about people who would like to have the option to travel to certain countries and “live the life” that they want to.

Henley & Partners, the publishers of the passport power ranking is the world’s leading citizenship planning firm. It also advises countries on how to design these programs.

The firm’s main business used to be immigration consultancy. But in 2006, lawyer Christian Kälin, chairman of Henley & Partners and dubbed “the Passport King” by Bloomberg, helped St. Kitts to set up an economic citizenship programme. The island in the West Indies managed to slash its debt “from 164 per cent of GDP in 2010 to 104 per cent of GDP at the end of 2013” – all due to the citizenship programme.

“It would be wrong to say that the Caribbean is an area of focus for Henley & Partners because those programmes are already established.” […] But instead, he says the firm is looking for new areas, such as “South-East Europe” and “the post-Sovjet space.” It is those areas that have the need to drive “new liquidity into the economy, to attract foreign direct investment into the economy so that new infrastructure and new businesses can be developed that diversify the economy.”

Correlation between visa freedom and other liberties

Two researchers at Syracuse University and the University of Pittsburgh have used the vast amount of data from the Henley Passport Index to look into correlations between visa freedom and other kinds of liberties.

Uğur Altundal and Ömer Zarpli found that “there is a distinct correlation between visa freedom and investment freedom, for instance. Similar to trade freedom, countries that rank highly in investment freedom generally have stronger passports.”

In their research, they add that “European states such as Austria, Malta, and Switzerland clearly show that countries with a business-friendly environment tend to score highly when it comes to passport power. Likewise, by using the Human Freedom Index, we found a strong correlation between personal freedom and travel freedom.”