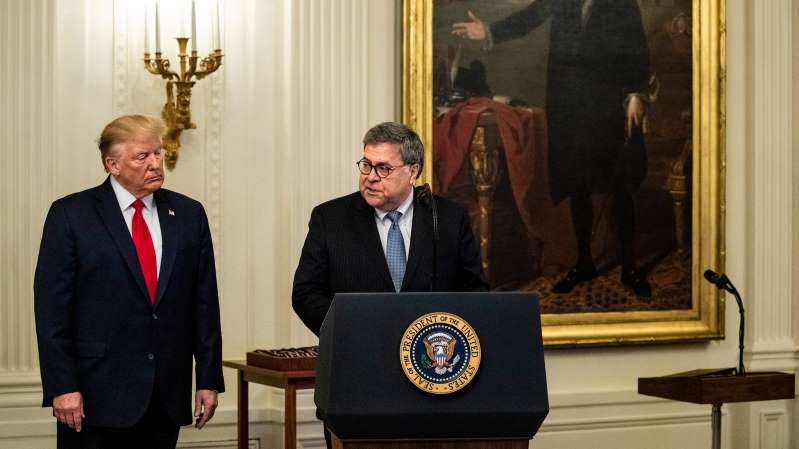 WASHINGTON — President Trump pushed the Australian prime minister during a recent telephone call to help Attorney General William P. Barr gather information for a Justice Department inquiry that Mr. Trump hopes will discredit the Mueller investigation, according to two American officials with knowledge of the call.

The White House curbed access to a transcript of the call — which the president made at Mr. Barr’s request — to a small group of aides, one of the officials said. The restriction was unusual and similar to the handling of a July call with the Ukrainian president that is at the heart of House Democrats’ impeachment inquiry.

The discussion with Mr. Morrison shows the extent to which Mr. Trump views the attorney general as a crucial partner: The president is using federal law enforcement powers to aid his political prospects, settle scores with his perceived “deep state” enemies and show that the Mueller investigation had corrupt, partisan origins.

The Justice Department inquiry and a parallel but unconnected effort by the president’s personal lawyer Rudolph W. Giuliani represent a kind of two-front war. Mr. Trump has said that Mr. Barr can help him validate his 2016 electoral victory, and Mr. Giuliani has been trying to unearth damaging information about former Vice President Joseph R. Biden Jr. in anticipation of the 2020 race.

As part of his efforts, Mr. Barr in recent months has asked the president to facilitate communications with foreign officials and has made at least one trip to Italy to secure cooperation, according to a department official. The inquiry is examining American intelligence and law enforcement activity around the Trump campaign and whether it was legal.

Mr. Trump initiated the discussion with Mr. Morrison in recent weeks explicitly for the purpose of requesting Australia’s help in the review, according to the two people with knowledge of the discussion.

In making the request — one of many at Mr. Barr’s behest — Mr. Trump was in effect asking the Australian government to investigate itself. F.B.I. investigators began examining Trump ties to Russia’s 2016 election interference after Australian officials reported that Russian intermediaries had made overtures to Trump advisers about releasing information that would damage Hillary Clinton’s campaign.

Australia’s top diplomat in Britain had met in London in May 2016 with George Papadopoulos, a Trump campaign foreign policy adviser who revealed the Russian offer of dirt on Mrs. Clinton.

Mr. Papadopoulos also said that he had heard from an academic named Joseph Mifsud that the Russians had “thousands” of Mrs. Clinton’s emails. Mr. Mifsud, who was last seen working as a visiting professor in Rome, has disappeared. Trump allies including Mr. Giuliani have put forth an unsubstantiated claim that Western intelligence agencies planted Mr. Mifsud to trap Mr. Papadopoulos.

Mr. Barr met with Italian government officials on Friday in Italy. A Justice Department spokeswoman, Kerri Kupec, would not say whether he discussed the election inquiry or Mr. Mifsud.

“At Attorney General Barr’s request, the president has contacted other countries,” Ms. Kupec said, to ask for introductions to foreign officials for the Justice Department inquiry, which is being led by John H. Durham, the United States attorney in Connecticut.

In a statement, Hogan Gidley, a White House spokesman, sought to focus on Mr. Trump’s political opponents. “The Democrats clearly don’t want the truth to come out anymore as it might hurt them politically, but this call relates to a D.O.J. inquiry publicly announced months ago to uncover exactly what happened,” Mr. Gidley said.

On Monday evening, a spokesman for Mr. Morrison said that “the Australian government has always been ready to assist and cooperate with efforts that help shed further light on the matters under investigation.”

“The P.M. confirmed this readiness once again in conversation with the president,” he added.

Mr. Barr has taken an active role in overseeing Mr. Durham’s work, American officials said, and is pushing his team to move as quickly as possible, according to other people familiar with the investigation. Mr. Durham needs to identify key witnesses and go through the time-consuming process of procuring documents or other material from foreign governments, a lawyer briefed on the case said.

Mr. Durham has interviewed F.B.I. agents involved in the investigation into Mr. Trump’s campaign, people familiar with the review said. Mr. Durham’s investigators have also interviewed other current and former intelligence officials outside the C.I.A., the people said.

But Mr. Durham has not questioned current C.I.A. employees, even though his team has had discussions with the agency about interviewing some of them, according to the people.

The Justice Department review of the Russia investigation is not itself a criminal inquiry. Mr. Durham is not wielding law enforcement powers like the ability to subpoena documents or compel witnesses to testify. He has the authority to read documents that the government can acquire without subpoena and question witnesses who voluntarily agree to interviews.

The Justice Department said last week that law enforcement officials were exploring the extent to which other countries, including Ukraine, “played a role in the counterintelligence investigation directed at the Trump campaign.” At the very least, Mr. Barr has made clear that he sees his work treading into delicate territory: how closely allies’ law enforcement and intelligence agencies share information with American officials.

Current and former Justice Department officials said that it would be neither illegal nor untoward for Mr. Trump to ask world leaders to cooperate with Mr. Barr. And it is within Mr. Barr’s powers to speak with foreign law enforcement officials about what his prosecutors need.

“There isn’t anything inherently wrong with the president asking a foreign leader to assist in a U.S. investigation,” said George J. Terwilliger III, who served as deputy attorney general under Mr. Barr during his first stint as attorney general in the 1990s.

He added, “A request for help with the weight of the president behind it is bound to get greater foreign attention.”
But others criticized Mr. Barr’s active role in the Durham inquiry. “It would be extremely unusual for the attorney general to be this personally involved in any investigation, let alone one where his personal integrity has already come under question,” said Matthew Miller, a top Justice Department spokesman during the Obama administration.

“It is even more inappropriate that he is so closely involving the president when the entire probe is something the president repeatedly demanded to settle scores with people he sees as enemies,” Mr. Miller added.
The report by the special counsel who completed the Russia investigation, Robert S. Mueller III, confirmed that Australia played a central role in the origins of the original F.B.I. inquiry. But like so much about the pre-election period, the episode has been the subject of a counternarrative marbled with conspiracy: that the Obama administration dispatched the Australian official, Alexander Downer, to spy on the Trump campaign as part of a broader effort to help Mrs. Clinton get elected.

No evidence has emerged to support that claim, but the conspiracy theory has been advanced by some of the president’s allies in Congress, by Fox News commentators and by Mr. Papadopoulos, who served about two weeks in prison for lying to F.B.I. agents who questioned him about contacts between the Trump campaign and Russian intermediaries.

Mr. Morrison also met Mr. Trump in Washington this month for official meetings and a state dinner at the White House. Mr. Barr attended the dinner, and Justice Department officials met with Australian representatives during the visit.
The attorney general set off controversy in April when he told lawmakers that “spying” on the Trump campaign had taken place as part of the Russia investigation, and that there was a “failure among a group of leaders” in the intelligence community.

He later announced that he was reviewing the origins of the Russia investigation, and Mr. Trump said in May that he wanted Mr. Barr to scrutinize the countries that he has accused of conspiring to damage his 2016 election hopes. The president said he hoped Mr. Barr “looks at the U.K., and I hope he looks at Australia, and I hope he looks at Ukraine.”

“I hope he looks at everything because there was a hoax that was perpetrated on our country,” Mr. Trump added.
Days afterward, Australia’s ambassador to the United States wrote to Mr. Barr saying that Australia “will use its best endeavors to support your efforts in this matter,” according to a letter made public late Monday.
Julian E. Barnes contributed reporting from Washington, and Maggie Haberman from New York.

Get Expert Help With Press Release Services Through TOP.

4 Reasons All Freelancers Should Be Working With TOP.

EVERYTHING BUSINESSES NEED TO KNOW ABOUT FOREIGN DIRECT INVESTMENTS.

Benefits of Foreign direct investment to the recipient country.

The Use of Demographics and Psychographics in Digital Marketing.

Looking For The Right Ebooks To Read With TOP.

Why Go With TOP For Any Translation Services.

3 Reasons To Go With TOP For Any Online Translation of Documents.