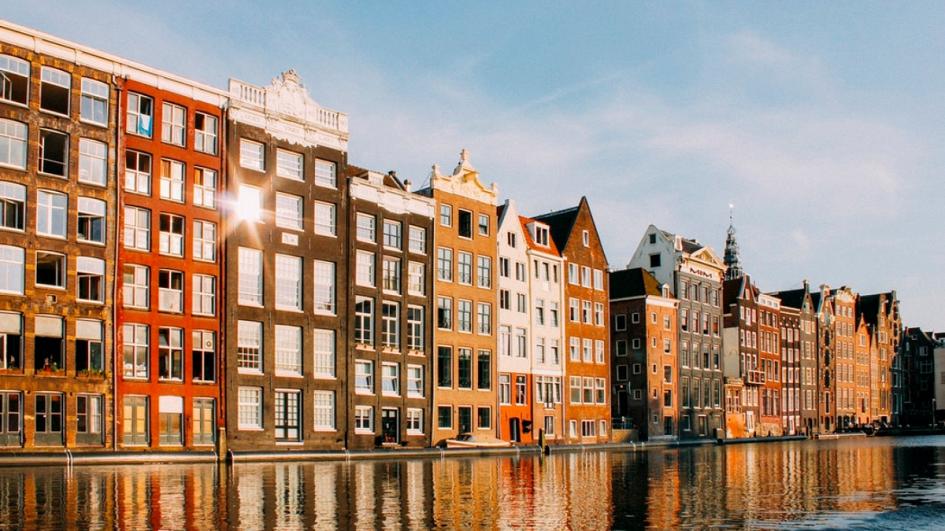 Cycling in Amsterdam: our guide

Taking in a new city is all the more fun – and eco friendly – on wheels. We took to the saddle and biked around Amsterdam.

If you’re a keen cyclist and are looking to visit the Netherlands’ capital city, you’re in luck, Amsterdam happens to be one of the most bike-friendly spots in Europe and happens to have been named the most bicycle friendly city in the world.

This isn’t particularly surprising given the city has over 800,000 bikes (more than the number of residents) and a network of over 250 miles of cycling track. With an abundance of canals, cute coffee shops and great architecture, it’s a pretty place to cycle around, too. Cycling is actually the preferred mode of transport for locals and tourists alike and you’re unlikely to come across a cobbled street or canal-side vista that isn’t lined with row upon row of parked up bikes.

As such, expect to find lots of cycle lanes and a body of traffic well-prepped for dealing with people on wheels. You won’t struggle to find somewhere to park your bike, either, and there are numerous cycle trails weaving through the city as well, so you’ll barely even have to pay attention to a map.

You’ll be pleased to hear that the city has a sophisticated cycling infrastructure – it’s full of cycle lanes, here are plenty of paths and signs solely dedicated to cyclists. Don’t be surprised if you see hardly anyone wearing a helmet – the city is pretty safe to bike around so not many people feel the need. If this makes you uncomfortable, though, you can hire one from a bike shop with ease.

Traffic rules (such as lights and staying off pavements) should definitely be obeyed – you might spy a local flouting them from time to time but police and traffic wardens do ticket bikers they catch in the act. The city also runs a tram system and it’s worth noting that they’re always given the right of way.

When hiring a bike, make sure they include lights for when it gets dark (another thing the police like to pull you up on) and a sturdy bike lock – you must ensure you chain your bike up, even if you only leave it for a couple of minutes. Bike theft is as common as the bikes themselves in Amsterdam. And last but not least: a lot of bikes use back pedalling to brake, rather than handlebar levers, so if you don’t know how to do this, get in a good practice before you leave the rental shop.

Explore your wild side and head out on your own adventure with our tailor-made guide to cycling the sights of the city centre.

One of the best places to start is in Amsterdam’s most famous neighbourhood, Jordaan, which offers a central hub of galleries, restaurants and picturesque canal routes. One of the oldest parts of town, it’s been gentrified over the years but still retains much of its salt-of-the-earth charm.

Set off from the Amsterdam Central Station and make your way to Anne Frank House, where you can learn all about the famous diary keeper’s life as a jewish child hiding from the Nazis. As the actual site of her hideaway and eventual capture, it offers a wealth of information about this bleak time in European history.

From there, head towards the 9 Streets, a criss cross of nine picturesque alleyways that form part of the Canal Ring. Filled with boutique shops and cute cafes, it offers an exciting place to stop for a cafe and a souvenir hunt.

Next, it’s onto Museumplein, which is the main hub of museums in the city. You should definitely take a look at the Rijksmuseum, which offers a snapshot of Dutch art and history through the ages.

It would be rude not to then nip back on your bike to the Heineken Experience, which is just a two minute cycle down the road. Expect this to be a little touristy, so if you’d rather drink like the locals, hold on ’til the end of the ride.

Albert Cuypmarkt makes a great lunch stop, allowing you a true taste of Dutch local life in the form of street food. It’s the country’s largest and most popular outdoor market and offers some of the best stroopwafels (freshly baked caramel filled waffles – a local favourite) you’ll find on the planet as well as a fantastic array of organic and fresh local produce.

Once you’re satisfied, hop back on the bike and head out to Vondelpark – the city’s largest park – for a bit of downtime. Make sure you take a picnic blanket with you so you can sit amongst the flowerbeds and people watch.

From there, head back into the centre and stop in Dam Square, where you’ll find the Royal Palace watching proudly over the bustling tourists and locals below.

Finish off the tour at one of the city’s most authentic brown bars, De Oranjerie, where you can toast over a local brew to your day of adventuring.

If you’d rather have someone else do all the heavy lifting when it comes to planning the route and its stops, there are plenty of cycling tours that take in the best the city has to offer.

A particularly popular one is Mike’s Bike Tours and Rentals, which offers a 3 hour tour of the city centre, passing through Museumplein (Museum Square), the Red Light District, Canal Belt and the Royal Palace. You’ll learn more about Amsterdam’s so-called ‘cafe culture’ and many of the buildings you pass along the way. The tour guides are knowledgeable and friendly and the route flat and easy to follow, so you can let go of the fear that you’ll be left stranded at the bottom of a hill or at a set of traffic lights.

Another great option is the A-Bike Rental and Tours, which offers one and three hour guided tours of the city. If you’re short on time, the one hour tour will be a bit of a whistle stop but will give you a good overview of the city whilst the three hour tour is a takes in more sites and offers a more in-depth knowledge of each spot, including Vondelpark, Rembrandtplein and the Jordan District. With free coffee and wifi at the shop you start and finish at, it’s a favourite of visitors from all over the world. Tours start at 10am and 3:30pm each day.

A great Instagram account to follow to get you excited about cycling in Amsterdam is @amsterdamcyclechic, which snapshots all the weird and wonderful ways in which the locals use their bikes to transport themselves and their belongings.

If you’re keen to rent a bike for just a few hours, download FlickBike, which allows you to reserve, find and pick up rental bikes from all over the city. It’s very similar to the Boris Bike scheme in London.

Another great app to have on the go is FlatTire, which allows you to schedule immediate bike repairs when you’re caught in a bind. The company will send out a bike mechanic as soon as possible anywhere within the city centre between 9am and 9pm every day.

Also make sure you download the I Amsterdam Maps and Routes app, which does exactly what it says on the tin, giving you access to myriad maps and suggested routes across the city, taking in points of interest and landmarks. You can even download them to use when you’re without internet.

Conscious was one of the first hotels to get serious about sustainability without compromising on style or comfort. With a sleek, minimalist look, plenty of natural light and bright foliage, their efforts are commendable. They use LED lights, install recycled furniture (the coffee tables are made out of recycled coffee cup holders) and the energy is renewable. There’s even a no-cash policy. You’ll find it in Westerpark – one of Amsterdam’s most exciting neighbourhoods, that happens to be within cycling distance of the city’s most famous sites.

If you’re looking for a sustainable meal, head to De Kas – a fine dining restaurant housed in an a former greenhouse that serves up delicacies from its own garden. Menus are seasonal and usually take on a distinctly Mediterranean theme.

This year marks 350 years since Rembrandt’s death – probably Amsterdam’s most famous resident – so look out for an exciting programme of events and exhibitions celebrating the master painter’s life and works taking place all over the city throughout 2019.

Sell your photos online with the online publishers